We are so much more than books!

Our 2801 Orange Street location offers a genealogy room, a full-service passport facility, and an art gallery. We also have plenty of quiet spaces to work and study, as well as areas where the noise restrictions have been relaxed so you can play video games with friends or collaborate on a masterpiece. But first, coffee at Overdue Brew!

Our branch in the historic Argenta District houses its own art gallery and our largest collection of DVDs as well as a computer lab and youth department. And if you can’t come to us, we’ll come to you! Homebound patrons can sign up for monthly deliveries, and everyone should check out our digital services that you can access from any internet-connected computer! Whatever you need, the Laman family is here to serve you!

The mission of the William F. Laman Public Library is to maintain and improve the quality of life for all citizens of our community by providing resources that enhance and contribute to literacy and foster community engagement with information, culture and civic life.

The City of North Little Rock did not have the services of a public library until 1946. In 1945 a library commission was formed and worked diligently and the citizens voted to tax themselves at a 1-mill rate to operate and maintain a library. The city purchased a very attractive two-story brick residence, built more than 35 years previously at 211 Maple Street. It was built as a home by Mr. & Mrs. Ike Davis. Miss Myrtle I. Deason was hired to organize and direct the library beginning January 2, 1946. Deason held a Bachelor of Science and Library Science degrees from the University of Illinois at Urbana, had 14 years’ experience in library work. She served at the Carnegie public library at Sioux Falls, S.D. from 1931 to 1932, after which she became associated with the state library commission at Pierre for one year. She joined the state library staff of Illinois in 1943, and held the position of field visitor until 1946 when she became the first librarian of the North Little Rock Library. She worked one full year with the Board of Trustees before the library opened in 1947. 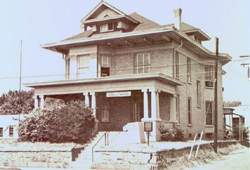 The original library was housed in a dwelling built at the turn of the century located at 211 Maple Street and opened its doors on June 17, 1946. The building contained two reading rooms, a work room, children’s room, two lecture rooms, an office and a three-room apartment on the second floor served as living quarters for Miss Deason. The architects were Erhart and Eichenbaum. During its first year of operation 15,055 people visited. At the time of its opening it had 2,000 books and by the end of the first year had 5,500 volumes.

In February of 1947 the Library Board secured a surplus building from Camp Robinson, and the building located near the Negro Booster Park under a special lease offered by the Missouri Pacific Lines at 800 East 13th Street. The Missouri Pacific Booster Park was a baseball field located at 13th and Vine Streets. The park was primarily used for Negro baseball during the 1930’s and 1940s, hosting such teams as the Dubisson Tigers and the Little Rock Cubs. “The Sporting News” suggested that the Little Rock Travelers should relocate to this field because it was better than any other field in the area.

The branch opened on July 28th, 1947 and was open from 2 to 7 P.M. Monday through Saturday with Marcelle Adams in charge. A.J. Bonner was the Librarian. When the two branches combined into the William F. Laman Public Library on Orange Street, the building became the North Little Rock Handicapped Children’s Center, the only school for Negro retarded children in the state.

In 1949 Mayor Ross Lawhon proposed the construction of a new municipal building and stated that the present city hall would be ideal for use as a library. When Lawhon’s proposal died, the library board replaced the heating systems with more modern equipment. A gas operated heating unit replaced the old oil heating system in use at the Negro Library and gas stoves were replaced with floor furnaces. In November of 1949 Rev. James W. Workman was elected chairman of the Board succeeding Mr. Glenn Zimmerman. On January 2, 1952 Miss Deason resigned to accept a similar position at the University of Arkansas Graduate and Pharmacy School at Little Rock. During the first five years, the library grew very slowly, from its beginning of 3,000 books and 3 employees. In February of 1952 Miss Elsie Wiesenberger was employed as head librarian.

In 1959 a group of determined citizens and the director Elsie Wiesenberger sparked a drive for a Civic Improvement Bond issue that would include a new library building. The bond approved November 1st, 1959 purchased land, at a cost of $125,000, in the urban renewal area of Military Heights. Some of this land would be sold to the U.S. Government for a new post office, an office building for the Municipal League and a proposed new city hall. The bond included $200,000 for the library project plus $17,500 from the sale of the Maple Street library building, $275,000 for a new police and courts building, and $85,000 for a new health clinic. This area became known as the North Little Rock Civic Center.

After teaching in Hope, Wiesenberger served as Hempstead County librarian before coming to North Little Rock, serving 1951-1959. The new building was completed in 1962. The Maple Street Library and the 13th Street Library were moved into the facility that was formally dedicated on December 30, 1962 as the William F. Laman Public Library of North Little Rock. In 1964 Wilma Walloch was hired to replace Mrs. Paul Elrod as librarian. Elrod was fired in November of 1963 because of what was described by the board as “failure to co-operate fully with members of the Board.” Mrs. Henry Clifton was appointed as Mrs. Elrod’s temporary replacement until Mrs. Walloch began work. Walloch held a bachelor’s degree from Arkansas State Teachers College in Conway and a master of science in library science degree from East Texas State College at Commerce, Tex. She was assistant librarian at Sylvan Hills High School in 1961-1962. Prior to that she had spent almost three years as an employee of the North Little Rock Boys Club, Two years as secretary at Rose City Elementary School and seven years as teaching aids librarian in the office of the Superintendent of Schools. Helen Ankrum followed as director, and then in 1970 the library was expanded under the direction of Patricia O’Bannon. Nancy Pack served as director from 1981 to 1987. Jeff Baskin served as Director from 1987 to 2014. In the Fall of 2014, long-time Executive Director, Jeff Baskin died suddenly. The library’s board of directors began a national search for a new director with the help of Bradbury Miller Associates, a professional library search firm. After a year of searching and interviewing potential candidates, Crystal Gates was selected as the new Executive Director. In October of 2015, she energetically took on the task of re-invigorating the library system.

In May of 2006 the William F. Laman Public Library opened its first branch on Main Street in downtown North Little Rock. The Argenta Branch, 502 Main Street, was located in the renovated building which at one time housed the City Hall and the downtown fire station. The 2550 square foot branch had a collection of approximately 10,000 adult and children's books, DVDs, and six internet computer stations. Fittingly, the library shared the historic building with the North Little Rock History Commission.

In the Spring of 2006, Laman Plaza re-opened after extensive landscaping and renovations. The plaza received new rock work, sidewalks and dramatic lighting. A variety of new trees and shrubs were planted, and flowering annuals were also added. The gazebo, designed and built in the late 1960's by famed architect E. Fay Jones, is still the centerpiece of the plaza. It overlooks the newly restored pond and fountains. Handsome wrought-iron gates and fencing now surround Laman Plaza. In 2020, the Laman Plaza was turned over to the North Little Rock Parks Department.

In September 2012, the Library system bought the historic Argenta Post Office at 420 Main Street for a future expansion of the Argenta branch.

Extensive renovation of the interior of the building began in the Spring of 2013. In addition to the regular collection spaces, a new computer lab was created with 20 public computers. An art gallery space and public meeting rooms were added as part of the project. An elevator was added to the southern exterior of the building to make the spaces more accessible to the public.

After a year of construction, and modernizing the historic post office space, the Argenta Branch of the William F. Laman Public Library had a grand opening on April 5, 2014. The festivities included a ribbon cutting and tours of the new facility. Several thousand people were in attendance.